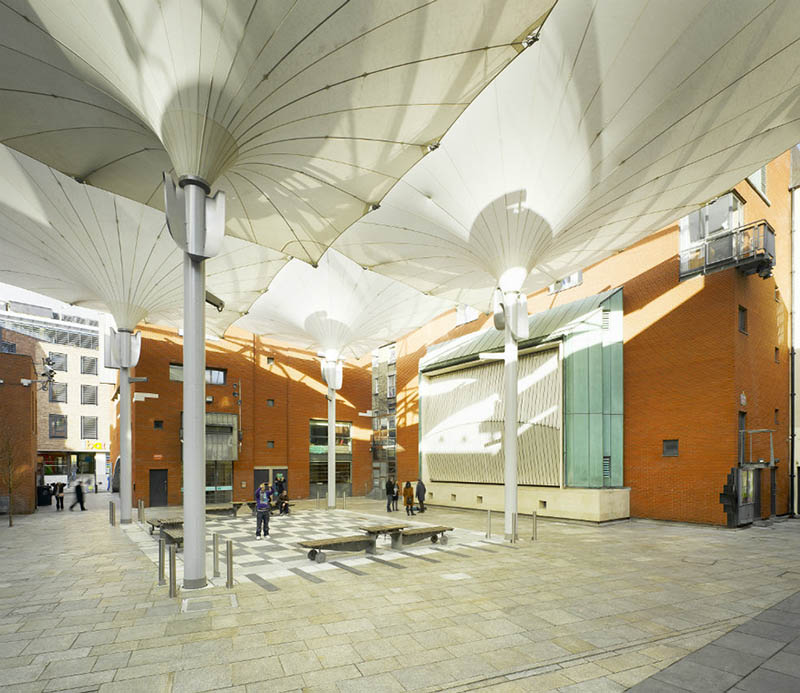 The umbrellas were designed by Dublin firm Sean Harrington Architects and engineered and manufactured by German/Swiss firm MDT-tex for Temple Bar Cultural Trust in Dublin. They were added to the square to alow for a certain amount of weather proofing for the outside events regularly held in the space.

“The aim of the intervention was to allow Meeting House Square to be used throughout the year in all weathers, but particularly in the increasingly inclement Irish summers, as climate change begins to impact. The project was the central focus of the 20th Anniversary celebrations of the regeneration of Temple Bar, Dublin’s Cultural Quarter; a retractable rain-screen roof, so that the space remained open air, but could be covered when necessary, thereby fulfilling the potential of his wonderful outdoor performance space, by increasing the certainty of performance and event programming.

Meeting House Square’s cover is the first of its kind in Ireland. The bespoke design comprises of four 21-metre high steel structures, each of which supports an asymmetric tilted umbrella, measuring approximately 11m by 14m. The closed umbrellas are elegant slim objects of sculptural beauty, with the canopy fabric encapsulated by the umbrella arms, inspired by bulrushes, reaching for the sky. Opening within approximately 12 minutes, the four synchronised umbrellas overlap like flowers to provide a continuous cover for Meeting House Square, the heart of outdoor cultural activity in Dublin. Floodlit from above through the translucent PTFE fabric, the square can be atmospherically lit in different colour moods. Audi