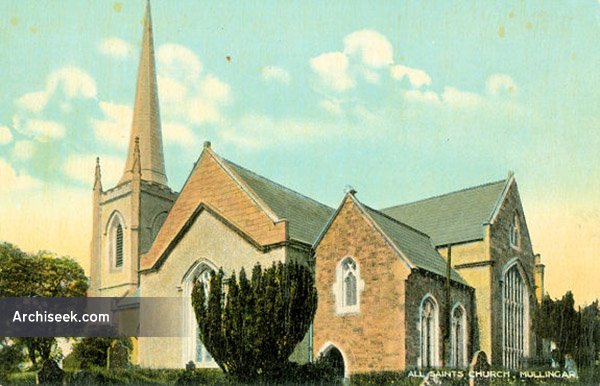 In April 1814 work commenced on the building of the present All Saints Church. The Board of First Fruits granted the Select Vestry a loan of £1200 to carry out the work. Money was also provided through a levy on the parish and by a gift of £200 from Kings’ Hospital school. The work was completed after four years, and a wall to enclose the churchyard was built in 1815. In the early 1860s, Welland & Gillespie were responsible for sizeable alterations which made the church broadly what is there today. They added new traceried windows, new galleries, staircases, and furniture. In 1878, Sir Thomas Drew was responsible for raising the chancel walls, a new roof, and a new chancel arch. In 1828, a spire was added, which had to be rebuilt in the 1890s.

By the turn of the 21st Century, All Saints Church was part of the largest parish in the Diocese of Meath. As churches were closed or sold off, stained glass windows from churches such as Ballymore and Mount Temple were installed in All Saints.